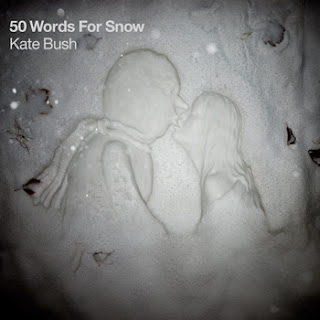 An album to lose yourself in when the snow makes going outdoors a trial, sit at your window and gaze at the white blanket as it slowly covers everything and eerily muffles sound and thought while Kate relates tales of melting lovers, metaphysical Yeti hunts, angels and ghosts. Kate weaves a world that is personal, sensual and mystical, in a way that is instantly recognisable and you will find yourself lost is this otherworldly place. Instrumentally sparse, Kate's thoughtful and well played piano is mostly the main instrument with occasional electronica or orchestral backing for added effect.

Opener Snowflake sets the wintry scene as over its almost ten minutes it languidly describes the life and fall of a snowflake backed by Kate's minimal but deep ivory tinkling. Narrated by Kate's son Bertie, he intones "I was born in a cloud" which has a poignancy to it that blurs the role he is playing in the song. The ultra-sad and eerie Lake Tahoe is a ghost story about a woman who drowned searching for her dog in the water. Creepy but at the same time this song is a construct of gossamer-thin beauty.

If I asked you to guess who had written a song about a love affair between a young girl and a snowman, who when she awakes after one night of passion with Mr Frosty finds that Misty has melted away leaving wet sheets and bits of twig, it probably wouldn't take you long to come up with Kate Bush, who has written songs about life from the perspective of a foetus, washing machines, doing deals with the Almighty, the number Pi, etc etc as if they were everyday subjects. The focal point and longest song of the album at over thirteen minutes, again centred around Kate's sparse but accomplished piano over Danny Thompson's and Steve Gadd's jazz infused bass and drums, this slowly evolving crystalline snow ballad builds to an understated and melancholic orchestral climax. I've already heard someone say it's too long, but to be honest I don't notice its length at all, as I can get completely lost in it's intricate reverie. Obviously a metaphor for a fleeting relationship, this is questioned by the cover shot that leads one to ponder if it was ever a metaphor at all, for this is Kate Bush we are talking about after all. Weird but lovely!

Next up, Kate breathily vocalises Wild Man, a song seemingly about a cerebral hunt for a never mentioned Yeti, but it is musically a bit tame and something of an 80s throwback, and is probably the weakest song here, and indeed the strange atmosphere that had been built up before is partly dispelled.

More conventional than Aerial's duet with Rolf Harris admittedly, but I feared that a love ballad duet with Sir Elton John might be a bit much to take after the delicate nuances that had preceded Snowed In At Wheeler Street, and although starting off reasonably restrained, with a backing that is for the most part almost ambient, John's over-cooked and portentous style stomps all over any delicacy and is unfortunately reflected by Kate at the end of the song as if she were trying to keep up, and it serves only to ruin the previous eerie atmosphere. Might make a decent single though...

The other guest appearance is on the following song and title track. English national treasure Stephen Fry gets to recite the 50 Words For Snow, the vast majority culled from Kate's limitless imagination as we Brits only have one word plus a few half-hearted adjectives for the white stuff. Fry's intonations are gentle and unobtrusive, egged on by Kate, and the song works well. The album concludes with a return to the glacial piano atmospherics with Among Angels, a place Kate probably aspires to, a gentle and fitting end to an album that grows with every listen.

In a world where many bands like to describe themselves as "prog" but in reality are anything but, it is a pleasure to return to an artist who is genuinely progressive and could teach some of those po-faced earnest triers a thing or two about experimentation.

Releasing her second album this year, Kate Bush has been uncharacteristically prolific, for which we should all be grateful. A true and singular talent. Kate always surprises and this album is so completely different to the somewhat indulgent and disappointing Director's Cut, so different it sounds as if two opposing facets of her musical personality have been at work this year, and I certainly prefer this one! 50 Words For Snow is sensual, brave, and a touch bonkers, and we should expect nothing less from one of our more interesting current musical phenomena. All we need now is a return to the live stage.
at November 22, 2011