After a crawl up the M6, where we spent an hour in a slow moving traffic jam, we arrive at the venue about halfway through the set of support act In Fear Of Olive. Playing a raucous rockabilly hybrid, these guys seemed an odd choice, and I have to be honest, made a horrendous racket which was at least partly due to a horrible over-loud booming mix that set one's teeth on edge.

Being a tremendous beer snob, it is a very rare occurrence these days to find anything approaching a decent drink at gig venues and this place has to be the worst I've been to this year for lack of choice. On offer were two godawful lagers, a cider, and Guinness Extra Cold, which for the uninitiated is the famous Irish brew served at a filling-shuddering freezing temperature so as to remove any semblance of its original taste. Someone tell me the point of that!

So, armed with a bottle of over-priced fruit juice each me and my esteemed fellow traveller await Magazine, now reformed for a couple of years and having recently released their first new album in nearly 30 years, and a marvellous thing No Thyself is too!

The lights dim and the band minus Howard saunter on and launch into the opening bars of Definitive Gaze, and big cheer goes up when Howard Devoto, looking like a well contented geezer ambles to the mike stand for the opening salvo of his skewed and poetic lyrics. 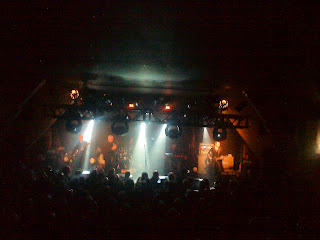 I have been a bit spoilt lately, attending gigs at Leamington Spa Assembly and Shepherds Bush Empire, where the sound was superb, and this place was acoustically a bit of a comedown, but the sound guys got it right for Magazine, luckily for our aging lugholes.


The band are in top form, John Doyle's unfussy drumming holding down the pulsebeat while Dave Formula delivers striking and melodic runs on his banks of keyboards, occasionally coaxing slabs of gut-rumbling noise from his synth. Noko is a great guitarist who manages to fill the hole left by the sadly departed John McGeogh with some style. Stan White on bass storms through Adamson's sinuous groove, and on Thank You (Falletinme Be Mice Elf Again) the whole band kick up a well funky stew that gets even a two left footed oaf like me cutting a rug!

During A Song From Under The Floorboards the whole place was jumping, particularly a couple of 50-something blokes, arms round each other, pogoing like it was 1980 all over again. I bet they ached in the morning! The whole audience seemed to be bawling along to The Light Pours Out Of Me, a post-punk anthem of stadium proportions that brought down da house!

It didn't take long for Howard and the band to get into their stride, playing with the audience, who were mostly but not exclusively fans from the first time round. Introducing songs with phrases like "And now track two, side one of Secondhand Daylight" to a rousing reply of Rhythm Of Cruelty from the audience. In the turnaround in Parade it was the "same old" waitress at the "same old" table, and where the service was once good, it is now only "so-so". He's an arch old geezer is our Howard! They say nostalgia ain't what it used to be, but not here maties.

About half the new album was played and it fitted in very well with the older songs and got a decent reception, as it deserves to. Hello Mister Curtis (with apologies) in particular had an added edge over the recorded version.

No prizes for guessing the last song in the encore which was of course Lipstick...only kidding...a blistering version of Shot By Both Sides closed the evening on an adrenalin rush of post-punkery. A victorious return for Magazine, and let's hope they keep it going for a while yet.