Radio For The Daydreamers - Clouds Of Smoke And Poison 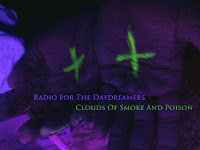 Pittsburgh's Radio For The Daydreamers have only been together for a couple of years and in that time have made two albums, this being the first, released independently in September 2009. Downbeat and strange, and drawing on influences from post-rock (whatever that means!) and modern ambient electronica, Clouds Of Smoke And Poison commences with Annunciation, a heavily reverbed  spoken-word treatise that may be setting out the philosophy for the band "..your job, as the radio, is to caress the people who dream...you are the poison, that works, like a Clockwork Orange, to make the dreamers believe they're smoking..." High ambition indeed, let's see what they're capable of..

Dark and gloomy, this is a murky record that for the uninitiated may at first listen seem impenetrable. Stoned mumblings mix with lo-fi minimalist and often distorted or over-recorded guitar, electronica, and synthesised as well as organic beats. Until we get to Rain on 24th Street that is, when things take a turn for the optimistic, and for the first part the song is an upbeat meandering through the scales with a driving back beat, before retreating to the previous atonal introspection. I do not yet know what to make of this...is it downer music for the 21st century? The following Leaving On A Sunday actually has a nice tune, albeit annoyingly disturbed by the slightly out of tune bass guitar. It puts me in mind of early Felt, who pioneered this kind of melodic minimalist guitar driven music waaay back in 1981 with the sublime Crumbling The Antiseptic Beauty.

Weirdly compelling nonetheless, I find myself sucked in to the enveloping soundscape of I Ran Away From Home Once wherein manipulated found sounds and swirling keyboards are later joined by flanged guitar create a thing of fragile delicacy. Sleeping On A Cloud has some female vocals that are echoed to such an extent as to make them nigh on indecipherable, but the effect is to create a stoned wooziness that floats off, well, on a cloud I suppose! My favourite moment of the album without question.

Judging by the song titles and searching through various online references, the band, if that is what they are, for it seems a deliberate tapestry of mystique is being weaved, are not above a bit of artistic pretension, coming up with phrases like "Reject the beauty, before it dare rejects you". You can make your own mind up on that one. As Annunciation also says, "...it is half-past cocaine now..." and that about sums this up, as the whole sounds like a long comedown.

A strange, introspective, gloomy and somewhat disjointed album that has moments of beauty and moments of odd out-thereness, and at times what seems like a deliberate ploy to de-tune the bass, or over-record the guitar, which is not art guys and gals, it's just irritating. The band seem to have dismissed this album as an irrelevance, deleting any links to reviews on their website, claiming "This page is basically a waste of time, and time only" so maybe I've wasted my own time here, who knows. It will take more than a few listens to reach the bottom of this particular swamp I can tell you!

PS - I have their latest offering to listen to, and the band have yet to kick it into touch, so, watch this space....

Line up:
Absolutely no idea!