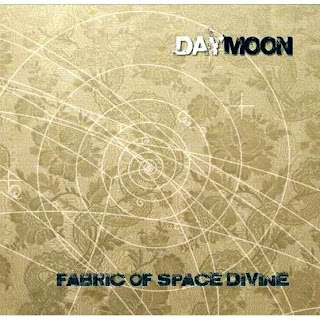 One of my earliest reviews on this blog of an album that was sent to me for that purpose, as opposed to a review of something from my own collection, was Daymoon's debut waxing All Tomorrows. One would like to think that both the band and myself have progressed from stumbling beginnings.

Well, I don't know how I've fared in the interim, only you, dear reader, is in a position to judge, but Fred Lessing, leader of this Portuguese band of merrie proggers used to describe his band's sound as "regressive", whereas now it's "transgressive". Let us attempt to find out what this means, if anything at all.

Never one to shy away from a big idea, or several big ideas at the same time, a problem highlighted in my review of the debut, Fred has admitted in the past that he occasionally needs his rapacious creative instincts reining in a tad. So, with that in mind this time round the concept is the merely "the history of the Universe". Made me smile, that did!

Checking the band's website, it seems that this album was written before the debut, and so any attempts at plotting a progression are foiled from the outset. Oh well, onwards and...sideways; maybe this is the "transgression" we were told about?

In fact, so prolific is Fred that a third album Cruz Quebrada is already at the rehearsals stage, and promises to be a bit different from previous recordings as the songs deal with Fred coping with the sad death of his wife Inês; but that is a another story for another time.

Back to the history of life, the universe and everything...after a fairly low-key Big Bang we get into the album proper with Seed Of Complexity which has an almost folky feel to it and would be reminiscent of The Strawbs were it not for its restlessness and its refusal to stick to any theme for more than a handful of bars. There is even a harmony section about halfway in that borrows heavily from Chocolate Cake, the first track from Woodface by Crowded House. At nine minutes long it displays a schizophrenic ability to shift from the aforementioned Strawbs/Crowded House folky feel to almost avant reeds and woodwinds over a shifting heavy bass line, and back again. This song has the atmosphere of a film soundtrack rather than a song, changing pace with the scenery. It seems Fred is still throwing in the kitchen sink and appears to be constantly at the mercy of his skittish imagination.

Beyond Nature is a homage to the Sun, sung in a menacing fashion by Michael Dorp, to an Eastern flavoured backing, and it is my favourite piece of music on the album, as it manages to stay focused and keep its eye on the ball, being all the more satisfying for that.

The vocals were not a strong point of All Tomorrows, and the same is true of this album, particularly on Seed Of Complexity and Beyond Trinity. Having been blessed with perfect pitch, although I sometimes wonder if the right word is "cursed", there are moments in both songs that make me wince. With Beyond Trinity we have the added problem of the lyric which nails its religious colours firmly to the mast. There are even some cheesy church organ sounds to end the thing. This "history of the Universe" was certainly not written by Stephen Hawking, although the author does qualify it by saying it is "profoundly misunderstood by Fred Lessing", so full marks for humility.

This song had me worried that this history of the universe was going to turn into a Christian treatise, always a turn off for me, but in fact the themes of the album later expand to include other religious and scientific viewpoints. However, tackling such complex subject matter is probably a mistake, for unless the author has a vast intellect and can offer both physical and metaphysical explanations without sounding contrived, the end result is always going to sound trite.

However, fair play to Fred, who has this to say about the concept:

"the concept behind the album is based in part on stephen baxter's mind-blowing scientific-philosophical fiction and non-fiction (any speculation about the future, however ‘scientific’, is of course fiction; and when you think about it, so is the past – even our own). my ramblings about the various religions are in part based upon histoire générale de dieu by gerald messadié for the christian part, my wife inês, who was wise and ridiculously well-read, for the part about ancient egypt, and a variety of sources for the islamic part, including extensive listening to beautiful turkish religious music.
this album stands for our secret hope that all of mankind will one day Get Together, or at least get its act together. musicians from 5 countries did so to get this album together"

At this point I would point out that I do not have the CD to hand, my review copy suspended somewhere in transit, so I am not privy to any further insights into the themes and subtexts of the album that may be explained in the booklet. This review is based solely on the Bandcamp streaming.

Let it be said that there are some interesting musical moments on this record. Anthropocentrics is a far too short funky sax workout, that should have been at least twice the length, and then there is the quite odd instrumental Beyond Good And Evil which meanders about like a Mike Patton avant-garde experiment left on the cutting room floor of a Fantomas album session.

The half way point of the album see us entering a surreal parallel universe Lloyd-Webber musical as a middle aged man searches for the meaning of life, whimsical acoustic guitar and orchestral ballet sequences'n'all! The transition from Beyond Good And Evil to Middle is as bizarre as it is jolting; like a train jumping the points. The one thing I will say is that so far, none of this sounds anything like Genesis, in the slightest, for which we can all be grateful. In fact musically the album shows a lot of skill, in inverse proportion to the lack of tact in the arrangement department.

Entering the second half of the album, lost in the labyrinthine tunnels of Fred's imagination, we are immediately presented with a song that Boney M could have had a minor hit with in 1978. No, really! It's all up there on the Bandcamp streaming link if you don't believe me. Following Rivers of Babylon b-side-that-wasn't Ice Prospector, Digital ponders the question of the disengaged human mind lost in the silicon synapses of the modern world. I know how you feel!

The ice prospector has landed his probe on Europa, and the filmic Beyond plays out atmospherically to a mission control narration that declaims "We are not alone". Fred has now left religious musings behind and takes the human race beyond the constraints of space and time, concluding "Time to fill the universe, with ever more complex life, time to shape all that is". The music here should really be a full-blown space rock opera, but it sounds a bit flat. Maybe Fred has finally mined to exhaustion his seemingly limitless seam of ideas?

The problem with this album is that there is too much going on, and the snatches of classical influence, medieval music, Iberian folk-tinged passages, Arabic camp fire music, a bit of near avant reed blowing, trad rock interludes; all these and more collide and bounce off one another to leave the listener cast adrift in the asteroid belt, not knowing which way is up, and feeling slightly queasy into the bargain. Fred makes no apologies for his capricious style, which he expands on in detail on the band website in typical self-deprecating fashion, and why should he? It's just a bit much for poor old me, that's all!

I never got into the grandiose and pretentious faux-classical concepts foisted on us back in the day by the likes of Rick Wakeman and The Alan Parsons Project, and Daymoon appear to be forging a modern equivalent. It would seem the much needed musical director that All Tomorrows cried out for has not been hired, and the seed of complexity has bloomed into an impenetrable dark forest. Somebody get me a torch...