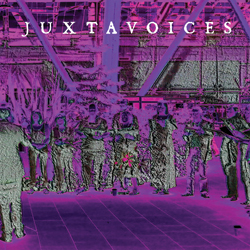 In my never ending quest for new music, sometimes something turns up unannounced and unbidden. A couple of months ago I had a review published on DPRP of the feral noise burst that is Combat Astronomy's Kundalini Apocalypse. Contributing rasping reeds and howling and buzzing electronica to that dense, odd and rather good album was one Martin Archer, the man behind Juxtavoices, who made a contribution to one track on the album.

Martin has since kindly sent me armfuls of CDs, including this new release by his "antichoir", as it is described in the title. I was wondering where to start with his intriguing catalogue, and where better that this latest release?

Firstly, may I just say that this is completely unlike anything I have heard before, and I have heard one or two things in my time on this planet.

Juxtavoices sprung from an idea of Martin's back in 2010 to assemble "thirty people...one Saturday morning to try out their voices to see how they might sound together". That sounds fairly straightforward you may think, but, "only a few of the thirty were experienced singers. They found themselves performing alongside musicians from the improvising scene...a few poets, visual artists" and other "less rarefied souls" who came along for the ride.

Martin's co-director Alan Halsey wrote the first piece, Oneverlastartletterminaliendlessong, which begins with strange staccato call and response from lone female and male voices, others joining in as it slowly resolves itself into a harmonic anti-melody, before dissolving into a kind of agitated chatter. Thus we enter the odd world of Juxtavoices.

Evidence of live performance, something that I would imagine is a strange but satisfying experience, is supplied by the photos in the tri-foldout digipak. This evidence shows that all this is scripted, and, having once been in a choir, I cannot imagine how this is written down, but written down it is!

The texts to each piece are written by a number of people, some of whom are in the choir. Three Iterations of a Poem by Samuel Beckett is exactly what it says, the poem readings backed with exclamations, confirmations and sighs from the choir. Other writers who have their works interpreted by the ensemble are artistic polymath Gertrude Stein, and sound poet Bob Cobbing. The latter wrote the text to Are Your Children Safe In The Sea?, which sounds like it was once the introductory line to a news item. The line is repeated by various voices using numerous inflections and emotions, some treated electronically, over more impressionistic declamations and vocalised punctuation. The cumulative effect is very unsettling, and indeed, like being in a small boat a bit too far offshore on an increasingly choppy sea.

This is not easy listening, and it is a work in which one has to invest some concentration. Nine Entries From the Encyclopaedia of Sexual Relations is self-explanatory, the chapter introductions initially read and then semi-sung by choir member Christine Kennedy, the rest joining in, the whole piece ebbing and flowing to the pull of an unknown moon. Again this is a highly experimental piece and no less "difficult" than the rest of the album. You wouldn't want to make love to it, that's for sure!

Choir member Geraldine Monk's She Kept Birds features the verses in unison chanting, then different sections of the choir interact with their own text selections. Although not in the least conventional, with no actual melody, more obviously than some of the other pieces the arrangement has its roots in traditional choir structure and so comes across as a more "normal" work.

At least that is how it starts. A section that swoops up and down is backed by low volume timpani, eventually joined by chattering choir members evoking a gathering of small birds at a feeding frenzy. There is a humour at work here too; when you allow yourself to get lost in the complexity of this number you cannot help but smile.

Gertrude Stein's Susie Asado has some "electronic realisation of guitar music" included, but as one would expect, not in a manner that renders the tune hummable. This song reminds me of the wilful anti-music Scott Walker has a fondness for, and I've no problem with that at all.

When describing his motivation for this project, Martin says it was "the sheer inability to control the music fully which appealed to me", but it has to be said that the end result, although it is as I said before unlike anything I've come across previously, sounds remarkably controlled. Of course, underneath that is the feeling that it all could collapse in on itself at any minute.

Suffice to say this is not an album that I will find myself playing with any regularity, as it needs to be listened to properly with no distractions, and how often does anyone get the opportunity to do that these days? There is a list of gigs printed on the CD cover, and I note that the last one in Sheffield on 6th October has yet to take place. I will make every effort to be there for what should be a surreal and entertaining experience.

Juxtavoices were directed by Martin Archer and Alan Halsey, and they are: