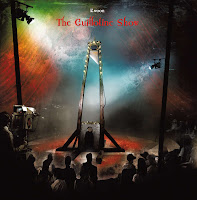 Kwoon, a rather fine French combo, first came to my attention thanks to my good mate Phill and I was especially intrigued by their quirky video for the splendid left-field pop song I Lived On The Moon. Now, with two well received albums behind them, comes this EP, released on 6th October, six tracks clocking in at just under half an hour.

The sound they make has a distinctive European feel, and the first song and title track The Guillotine Show opens with the tolling of a bell, the song making a spooky entrance in a waltz time, unfocused atmospheric vocals adding just the right amount of mystique to a Gothic tune.

Wark continues the Gothic feel, slow building keyboards backing mysterious vocals, the mystery added to by Sandy's accent making the English vocals sometimes hard to decipher, but this only adds to the atmosphere. Us Anglo types are suckers for a Gallic tinged vocal after all! The song eventually builds to a wonderful classic post-rock layered guitar assault.

Following song The Last Trip Of A Drunken Man (great title!) is an almost straight acoustic number, and you can just about make out the group through swirls of imagined languid cigarette smoke. The band show an increased maturity on the EP, and the songs exude a burgeoning confidence, a swagger exemplified by the intro to the anthemic Emily Was A Queen which one can imagine going down a storm in a live setting. A thunderous bass guitar underpins the latter half of Bird, which begins in a style not far removed from Deserter's Songs period Mercury Rev, and the EP ends with an acoustic version of the marvellous I Lived On The Moon, all introspective chords, delicate harmonies and haunting cello.

A strong collection of songs by a band going from strength to strength, and a great introduction if you've not come across them before.

The band are on tour from the  October 10th, playing all over Europe. If there's any tickets left, they are playing at the Barfly in London on November 1st, a date I'm sad to miss, having a full gig diary around that time. Oh well, definitely next time!

1. The Guillotine Show
2. Wark
3. The Last Trip Of A Drunken Man
4. Emily Was A Queen
5. Bird
6. I Lived On The Moon (acoustic remix remastered version)