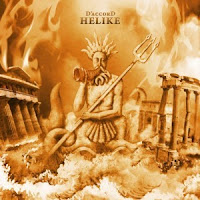 Helike is the second album by Norway's D'AccorD, formed, as they say themselves "...to capture the true essence of the early 70’s Progressive rock", so they fall into that often divisive category of regressive rock.

Helike is a sunken city off the Greek coast and often tagged the "real" Atlantis, and this two track album is its story writ large.

Of the two songs (Part I and Part II), the second is the better as it contains many more interesting instrumental passages, and the instrumentation is fuller than the first part. The overall production sounds a bit thin, particularly the keyboards, and dominating proceedings is the voice of Daniel Måge, who tends towards a Hammill theatricality, but lends enough of his own phrasing to make his voice fairly unique. On Part I he sounds a bit strained in places, but comes across far better in Part II. The cover informs us that the songs and lyrics were written by Daniel, and that he mixed, recorded and co-produced the album! No wonder his voice is so forward in the mix, which sometimes is a shame as the music, especially on Part II bodes well for the future of the band should they decide to branch out a bit more from recreating 70s sounds.

The construction of the album with two songs of around twenty minutes each fits well into the 70s scheme of things, as does the music itself. With plenty of easily identifiable classic prog references this will appeal to fans of Wobbler and their ilk. However the band show enough of their own skill to indicate that they should have the confidence to create their own niche in the future.