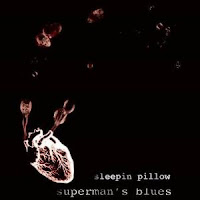 Sophomore albums come in four kinds, the first being those that are only a slight advancement on the first, and so a bit of a disappointment, those that are an almost mirror reflection of the first, and so tread water, those that sound rushed and as a result run out of ideas halfway through, and, rarest of all, those that make such a great stride forward that it takes the listener by surprise. Superman's Blues is such a beast as the latter, where the Greek acid rockers of the charming but obviously influenced Apples On An Orange Tree become a fully rounded group of their own making, taking those earlier influences and moulding them into their own complete sensory assault.

Darker and more mysterious than AOAOT, Superman's Blues is by turns brooding, triumphant, threatening, cynical and dreamy, taking the listener on a voyage through Sleepin Pillow's now own brand of progressive psychedelia.

The Superman of the title track is probably more Nietzsche's than Clark Kent's judging by the cynicism on display, "go and buy go and die, a million dollars in the sea"...boy he has got dem blues and bad! An Idiot's Point Of View is a highlight and might have been what mid period Porcupine Tree would have sounded like if they had let their psychedelic influences win over their love of metal. Some groovy synth work leads into understated riffage creating just the right amount of tension. An existentialist's trip through world weariness and paranoia, lines like "fear and hate products of propaganda, I was born and raised a child of mind control" say it all. Exuding a sparse beauty, the music and lyrics combine perfectly on such as Pathetic - "I forgive you, though I know you won't forgive me, I can recall what I gave you was pathetic", and I don't think he's talking about an unwanted Christmas present! This song and its companions combine to produce a melancholic but never morose piece of work that has an easy confidence and continuity within its grooves....do CDs have grooves?...who cares!

The instrumentation has progressed from the first album, and now displays touches of electronica, in places feeling like a sort of Here Come The Warm Jets for the twenty first century, Anakrousis being a prime example, waltzing aliens would cut a rug to it. Things get further skewed on A Big Circle where a robotic voice reads off a list of seemingly unconnected lines over a backing consisting of morse code and a classical quartet. Very odd and great fun for the slightly deranged! Masterpiece contains the great line "she comes in reverb", and, maybe fittingly the final song Superman Singing The Blues is an instrumental.

A modern psychedelic triumph that is not a slave to its influences and a big stride forward from their first album, one wonders where they go from here. Me for one, I can't wait to find out!