Asian Women on the Telephone - ICanT

The album is available on Bandcamp as streaming and as a free download, play it as you read, but not advised if you've got a headache!

Another band of art-noise-terrorists from Moscow on that home for the awkward and obscure waifs and strays of the Russian music scene, R.A.I.G. (Russian Association of Independent Genres) are the marvellously monikered Asian Women on the Telephone, a band for whom, as far as I can gather, musicallity is secondary to their theatrical stage shows. 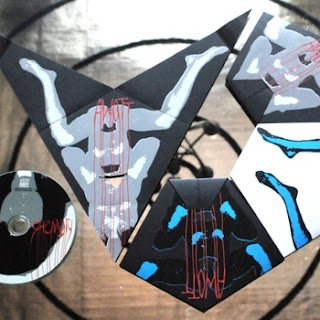 Opening proceedings on this their second album is Pleasure dome, an eleven minute ambient piece that gently bucks and sways like a leaky and creaking Russian freighter leaving the listener feeling a bit sea sick by the end. Cabaret Voltaire proto-industrial minimalism infuses Otverstie-uchitel', echoed male and female voices weave in and out of the repetitive slow beat and single note guitar picking. The conjured spirit of Damo Suzuki, but more unsettling. At nearly seventeen minutes long, this piece does not really go anywhere, but maybe that's the point, for it could be the soundtrack to a European highbrow art house film. This slow and faintly disturbing industrial hypnotic quality pervades the whole album, and while certainly more accessible than, say, Nurse With Wound, it is not for fans of the more traditional musical structure.

In fact musical structure is secondary to creating an atmosphere of bleak post-industrial proportions. Their neighbourhood must be a grim place! Komu verish, konopataja barsixa has two chords in it, and feels like The Fall warming up while waiting for Mark E Smith to finish his pint. Strange percussion, scratching and yelping pervade the intro to Lysogo gonjal oganjan which continues in the primitive Can vein, a repeated chant slowly building. What is it saying? As my knowledge of Russian is zero, I've no idea but it sounds suitably crazy to me! The bass line in Vip-Maria-viva-trance recalls Jah Wobble from early PiL, and as a result the piece almost swings. Mr (or Miss) "Brown Polizei" layers some strange childlike keyboard stabs over the top, and the guitar is doing a Keith Levene impersonation. All we need now is Lydon's wailing and we're "Careering"! I find myself tapping along to the rhythm as compared to the torpid nature of what has gone before this is almost jaunty. The upbeat continues into the next track Kljuch, zamok, yazyk with the snare drum panning across the stereo spectrum while strange high pitched treated voices intone the track title accompanied by synth rumblings from the drains. Very odd, this, perplexing but intriguing and not easy listening. With Poxotlivaja gorbun'ja ischet & naxodit we're back to the slow persistent beat, and if I've got the translation all wrong and this is not about a "lustful hunchback" it damn well should be. Manic chuckling and ecstatic noises precede and interfere with what almost becomes a tune over shambolic percussion. Then the guitar starts stumbling around like, well, a drunken hunchback would be about right. Quite mad.

The pseudonyms the band use are great (see below) and have a touch of the Acid Mothers Temple about them, as indeed does last track title White rabbi motorcycle dub, which after the madness that has gone before is almost calming in a very off-kilter way. In fact you could well imagine a synapse-shifting gig where AWOTT were sharing a bill with AMT - now that would be something!

Not an album for those who insist on a melody, and guaranteed to clear the room of late stayers at a party, AWOTT have made a wilfully obtuse album to be filed with your most unpleasant Faust albums. I actually quite like it, but then again I can be a contrary sod!


The transliterated Russian track titles make little sense when put through Google Translate, but to give you a flavour, three I have at least hopefully partly deciphered are noted after the Latin transliteration....I could be completely wrong!