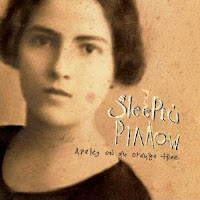 Sleepin Pillow, a Greek psych band with a big expansive sound crashed through the headphones with this, their first album released in 2008. Aiming to create "modern psychedelic rock blended with Greek and Eastern traditional music, with English lyrics", this they do with a certain amount of style.

They possess a sound that is all indie rock and spaciness, while eastern strings conjure desert vistas. "There's an amplifier in my heart, feeds an ancient fire in my heart" as it should. A lot of modern psych takes early Black Sabbath as its template and seems to come from a heavy metal place rather than what to this mind is the true source of psych rock, as exemplified by this group. More predicated on English indie, with the bass sound in particular reminiscent of early Cure, combined with a healthy early Floyd presence, and with more than a smidgeon of 13th Floor Elevators to add to the potent brew, this group tick all the right psych boxes for me.

Drug is suitably woozy, and Motherhood has a spooky vibe that along with Winter Dreams forms the high point of the album to these ears, the latter combining those Eastern strings again, with synth swoops and percussion creating a suitable backdrop for the`dreamy and breathy vocals. Throughout its seven and a half minutes Winter Dreams takes you somewhere else, and given the conditions in modern day Greece it's no wonder the band want to transport themselves and the listener to a Utopian idyll. Gorgeous!

"You ain't gonna go far" & "You're the son of a gun", our protagonist is the Apple On An Orange Tree of the title track, an ode to the perennial outsider, a rock'n'roll staple declaimed over a rousing coda, given that extra edge by the occasional and mournful strings. Slow builder Once heads for Secret Machines territory and is the most straight thing here. not to say it is bad, it isn't, but it is not the best fit with the rest of the album. The last two tracks, the lovely mainly acoustic and fuzzy round the edges Spell, followed by the very odd Hail Messiah form a fitting end to an interesting and engaging debut album.

Commercial enough to sell, strange enough to appeal, Sleepin Pillow have delivered a fine piece of work. The album is very well produced and the sound is as clear as a bell throughout. Some nice original ideas combine with traditional Greek inspiration, an obvious love of English indie music, and psychedelia from all over the place to produce a likeable debut from the six piece from Thessaloniki. Right, now I've got to sit down and listen to the follow up, 2010's Superman's Blues...watch this space...inner and outer...