French TV is a great band from Louisville, Kentucky, USA, who have been dispensing their twisted brand of avant-jazz-prog since as far back as 1983, and I e-flurried (©Robert Fripp) with founder and leader Mike Sary to come up with this doggerel.... 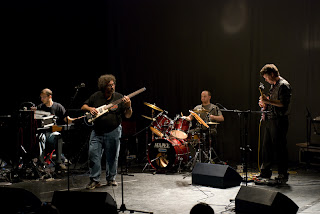 Roger: Hi Mike, and thanks for giving us your time for this chat. For those unfamiliar with French TV tell us a bit about the history of the band.
Mike: We came, we saw, we forgot to conquer. Sorry to be so flippant, but we're talking 20+ years here!
Roger: OK folks, just go buy the CDs here - http://www.frenchtvonline.com/orderingdistributors.htm - if you only buy one, get the 2CD version of FTV 10 - it really is good! See my review for more info.