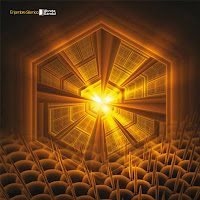 From Chile, Abrete Gandul offer up a satisfying stew of styles on this, their third album. Enjambre Sísmico (Seismic Swarm). It lives up to its English translation, sounding at times like a jazz infused Anekdoten, or a Latin King Crimson, with helpings of Canterbury influence updated to the 21st Century having spent the interim under Latino influence, and is one hugely enjoyable musical ride.
At an hour long the album has eight songs only two of which are under the seven minute mark. Such is the intricacy of the instrumentation that one’s attention is required all the time, but having said that it all flows together nicely, so the listening experience is never hard work, as can be the case with some more wilfully obtuse offerings.
Judging by the album titles and what I can understand with my limited Spanish from the story in the cover booklet, the album appears to be a journey through a natural disaster, with which being Chilean, the band are no doubt all too familiar.
The seven and a half minute Marejada (Surge) is a particular highlight, covering a gamut of stylistic influences, the math guitar reminiscent of Fripp, the warm ambient layers giving way to a laid back cool but never bland jazzy vibe. Each member is given the chance to shine, but no-one gets to show off unnecessarily, Consecuencia Natural  (you don’t need me to translate that, surely?!) being a case in point where Antonio showcases a delicacy of touch while dancing round the beat, before the song morphs into a Levin/Gunn-like sequence followed by some great sax blowing, all the while the bass of Pedro subsonically shaking the floorboards. Rodrigo’s guitar shines on Colapso, his warm and fluid soloing leading into a heavier section backed by swathes of synths before Rodrigo re-enters on flute, the theme slowly returning and building to a redemptive crescendo and then ending suddenly. An enticing piece of music that puts me in mind of Mel Collins era Crimson, but with Wetton on bass.
Jamie’s keyboards take more of a textural role than a lead one, in much the same way that, say, Richard Barbieri does with Porcupine Tree. As with Richard, Jamie’s contribution is an essential part of the whole, and both Convergencia Caótica and Intangible have some nice understated piano to demonstrate that he is a quality player. The latter builds on a cyclical piano riff, reflected by the bass and guitar at various tangents to create a slight dissonance that remains within the melody so never becomes jarring, while throughout Antonio holds down a no doubt difficult time signature, showcasing a group of players at the height of mutual understanding. Wonderful stuff!
Their Chilean/Spanish roots are to the fore on the closing track which starts like an off kilter flamenco, before a sax conjures up a smoky neo-Cuban jazz club feel, a lovely way to close the record.
Another contender for album of the year, in a year which has given us so much great music, this is a must for all fusion fans, lovers of heavier Canterbury sounds, Crimson, you get the picture.