Seven That Spells - The Death And Resurrection Of Krautrock: AUM 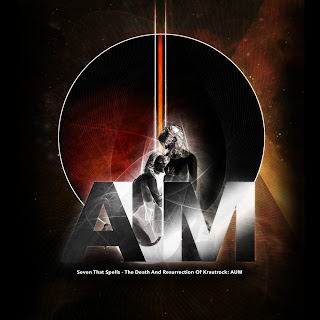 This is the first album in a projected trilogy whose lofty ambition is to attempt exactly what it says on the tin, so these guys do not lack confidence, and after eight albums in as many years why should they?

Back in 1972 German synth pioneer Deuter also released an album called Aum (or Om to us Anglos) whose proto-new age spacey vibe is well worth checking out, but there the similarity ends.

Opening song In is a reverberating wall of noise, repeatedly marching up the scales and resembles a triumphant army storming into battle. Brings to mind Guru Guru as the powerful drummer Stanislav Muškinja beats the daylights out of his kit in a fashion Mani Neumeier would have been proud of. As well as the obvious Krautrock vibe, the all pervading influence of the inevitable Acid Mothers Temple (with whom they have toured and collaborated in the past) is felt, particularly on title track Aum where Niko Potočnjak enacts an imaginary battle between Kawabata Makoto and Ax Genrich before Jeremy White's Om chant pulls the listener into a swirling void of ambient headfuck. It feels like the chant might suck your brains out, but then that maybe because the only way to listen to this righteous racket is at ear punishing volume. It will scare your children. David Byron of Uriah Heep introduced a song on their seminal 1973 live album with the words "Right, let's have everything louder than everything else", and this is what this "song", if that's the right word, achieves.

Ending on a final elongated "Om" we are thrown headlong into the cosmic white noise of Zero. Similar to Fire! Fire!! on the marvellous new My Brother The Wind album, you think you hear melodies in this that may not be there at all, as the drone of the low end feedback and reverb cleans the cobwebs from the corners of your psyche like a vacuum cleaner from the Orion Nebula.

Somewhere from the depths of Valhalla, Rock Ist Krieg charges over the horizon and comes at ya at full tilt. A redemptive piece as Croatians Niko and Stanislav know only too well the Hell that is war, and one senses a catharsis at work here. Jeremy shows he can play on the one with the best of them, creating a funky open groove with Niko and Stanislav, before Niko tears it up Makoto/Genrich stylee. If you're up for a bit of headbanging be sure to have the neck brace ready! A sonic riotous wake after the burning corpse of Krautrock has floated away across a mist covered forsaken lake, this is the most structured piece on the album, almost veering into metal riffage territory, and it kicks you out of the Om-reverie in fine fashion.

Out ends the first part of journey and we leave on a repeated motif chanting to the skies...we're not beaten yet and we will see you when the sun rises again.

With a mix that uses little or no compression, being faithful to the original Krautrock era, this record sounds IMMENSE and as such should only be played VERY LOUD. One of Niko's many pronouncements explaining the band's mission is...
'a commune of psychedelic likeminds exploring the multifaceted cosmos of freak out music and naked women in high hopes of achieving Buddha's blessing'   ...and who am I to argue. Oh, and the poster I was sent with this is well groovy!
4 out of 5

Listen and buy here, and check out their myspace page.
at October 15, 2011