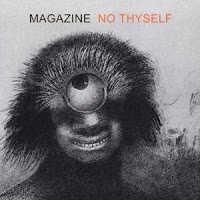 We live in a time where it seems that even bands with no living members have reformed in pursuit of one last undead payday. Probably the most exploitative recent reunion was that of the Sex Pistols, and ironically so given their original manifesto and the fact that Howard Devoto was instrumental in getting the Pistols to play the now legendary gig at Manchester Free Trade Hall. Lydon has certainly lived up to his epithet from the first time round: "...ever get the feeling you've been cheated?" he berated the crowd at the Winterland as his era defining band collapsed in a sea of drugs and paranoia in 1978. The lumpen reunion of the iconic punk band epitomises an undignified chase for filthy lucre alongside a complete lack of artistic integrity that so many reunions suffer from to some degree.

Cards on the table - I was a big fan of Magazine the first time round, and you might think from that introduction that my opinion of the reunion and No Thyself is not exactly of the highest order, but you would be wrong, although I must admit the album slid into the CD player with trepidation. My first worry was who would replace the angular and barbed guitar lines of the sadly missed John McGeoch of the original line up, and the answer is seasoned punky-new wave veteran Noko who amongst numerous other bands played with Devoto's short lived post-original Magazine band Luxuria. Noko manages to step into John's shoes with aplomb while being a distinctive entity in his own right. Barry Adamson's replacement is bass guitarist Jon "Stan" White, who occasionally and spookily manages to replicate Barry's sinuous and funky flanged bass groove to the nth degree. If you didn't no (sic) you would swear it was Barry on the four strings on some of these songs. The distinctive keyboards of Dave Formula and the solid pulsebeat of John Doyle are both present and correct.

Howard Devoto, looking like he has aged well from the booklet photo, wrote lyrics of a Hammill-like wit and intelligence, and here they are, still as oblique and easy as ever. Lines like "I was out probing the weaknesses of society, when I got my fat little fingers burned" and "But I've made my decision to die like a king, like Elvis on some godforsaken toilet" show Mr D has lost none of his dry wit and louche style.

The first song Do The Meaning has a certain "Shelley" as a lyric co-writing credit, so it's good to see the old twosome collaborating again. Other Thematic Material is a primal cry of lust, juxtaposing animal sex instinct with strange suburban banalities, Alison Steadman may have played the lead role, and it makes many musical references to past glories with the same knowing slyness as Mr D's lyrics.

Gothic atmospherics abound throughout as you might expect, Dave Formula's synth breaks weaving in and out like the return of a long-lost friend. Some real spiky guitaring introduces Hello Mr Curtis (with apologies) a musing on the courage or otherwise of suicide, and not unexpectedly given the thirty years since the last Magazine album, mortality is a running theme. The Burden Of Song is Howard's Tower Of Song, getting all philosophical, enslaved to the creative impulse, and is fittingly and muscularly insistent.

The Burden Of A Song by Magazine

Musically there is enough here to show that the creative juices are still flowing, and perhaps this is helped in no small measure by the addition of the two "new" members who get equal billing for all the tunes. I love the sweeping soundtrack qualities of Of Course Howard (1979); there's a song in slow waltz time, again reprising the band's fondness for dance time signatures, hell, there's even a ballad that were you to strip away the modernisms could have been Procol Harum...maybe not lyrically though!

Magazine were the art-punk band that prog fans could like, although I doubt the band would thank me for saying that. No doubt because of their musicality their work has lasted the test of time better than a lot of their contemporaries, allowing them to faultlessly take up the baton dropped all those years ago. No Thyself is a document of self awareness and wisdom acquired over the passage of time tempered by just enough but never too much cynicism, a chain of events of which all of us who were there back in '78 share common knowledge. And you can dance to it!

Roll on the gigs, a full listing of which appears on their myspace page.

The album is not on general release until 24th October, but you can get the limited edition digi-pack direct from the label's website now.