The band's successful resurrection last year for a TV special (available on dvd and well worth it) has provided fresh impetus to what has become a bit of a venerable English music institution, the reigning kings and elder statesmen of Canterbury, Caravan. The line up that played that show, Richard Coughlan excepted, sauntered out onto the stage at the comfortable and well appointed surroundings of The Stables and launched into a joyous rendition of the Memory Lain Hugh/Headloss medley from what for me is their best album, For Girls Who Grow Plump In The Night, so a great start!

Band leader and founder Pye Hastings, the only original member on stage tonight, was in fine form after initially struggling to reach the high notes. Singers often find their range decreases with age, and it's a wonder Pye can hit those high notes at all given that a lot of his songs seemed to have been sung at the top end his range, even three or four decades ago. 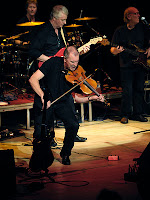 Star of the show was undoubtedly Geoffrey Richardson who was an entertaining MC as well as alternating between his trusty viola (son amour), flute, guitar and piccolo. He even played an amusing rhythmic interlude during Golf Girl on spoons! On keyboards we had Jan Schelhaas, who first played with the band as far back as 1976's Blind Dog At St Dunstan's, and on bass was Jim Leverton, another veteran of the 70s underground rock scene who first played on 1995's Battle of Hastings reunion album. Jan and Jim filled their roles with gusto, and both, indeed all the band seemed to be really enjoying the experience. Particularly so latest recruit the comparatively youthful Mark Walker on drums, although according to his website he left school in 1980 so he's not exactly a spring chicken himself!

Large chunks of In The Land Of Grey And Pink were played, an album that is 40 years old this year no less, including a sparkling rendition of Nine Feet Underground. We learned that the song was so called because Dave Sinclair wrote it in a state of some impoverishment in a cellar in Canterbury that was...nine feet underground. Sorry if that shatters any artistic delusions you may have had! Geoffrey also related the tale of the title of the great 2003 reunion reunion album (this band have stopped and started more times than a Trabant with a blocked carb), The Unauthorised Breakfast Item. Staying in a posh hotel in Trenton, New Jersey for the 2002 Nearfest, Mr R having already gorged on a sumptuous American breakfast wandered over to the Continental Breakfast buffet and helped himself to a croissant, cunningly concealed in his napkin, fuel for what he described as a forthcoming long day playing "Prawg" (heheh), when a maitre d' stopped him with the immortal line (adopts American drawl) "Excuse me sir, but you seem to have an unauthorised breakfast item". Well, it made us laugh, maybe you had to be there! 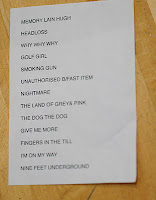 Songs spanning seven albums and some 33 years were played, along with two new songs which both sounded good to me and bode well for the planned new album. A fine evening's English whimsical entertainment was enjoyed by an audience who were largely but not exclusively, of shall we say, a certain age, but remember, everthing will be alright if you don't leave your Dad in the rain...:)
Finally, it was sad to hear that drummer Richard Coughlan is too ill to accompany his mates on tour this time round, and we wish him all the best.
Thanks to John Price for the photos.
at October 15, 2011