Burning Shed, distributors of and home to some wonderfully eclectic independent music celebrated its 10th anniversary at the charming venue that is The Assembly in Royal Leamington Spa (to give it its full name) on Friday last. 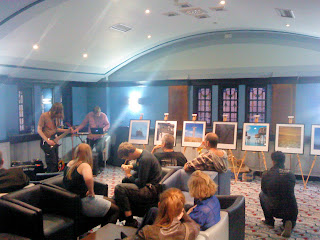 With a varied and esoteric bill, the gig commenced early in order to fit everything in. First up, in the upstairs gallery was the two man Resonance Association playing in front of a small exhibition of Carl Glover's images, many of which have appeared on Burning Shed related album covers. This was what the more artistically inclined would refer to as an installation, as Daniel and Dominic weaved dark ambience through heavily treated guitar and sundry electronica. The short set put me in mind of Manuel Göttsching's solo work, and intrigued me to the extent that I bought one of the 20 limited edition digi-packs on sale.
Venturing downstairs to the main hall where we were pleasantly surprised to see seating laid out, belying the dreaded word "Standing" on the ticket - we are not as young as we used to be! The short interval before the next instalment was spent perusing Burning Shed's many tempting wares on sale at the merch stall, and spending some cash on the audio delights on offer. As their motto is "Run by artists for artists", I am always more than willing to part with a few shekels!  Judging by the piles of cash being counted later in the proceedings, the hosts did more than alright out of the evening, as they deserved to.

Next up was Giancarlo Erra playing a selection of songs from one of my contenders for album of the year, Memories Of Machines' Warm Winter. With just an acoustic guitar and gentle ambience for backing, the songs, already ethereal, were given an extra fragility which was simply beautiful. An evening highpoint indeed, and leaving us wanting more than the fifteen minutes given.

A break of no more than five minutes preceded the entrance of Theo Travis, introduced as "King of the Flute". Playing a concert flute and I believe a clarinet, Theo played some soundscapes by layering the sounds and giving them treatments through various pedals, unseen by us as we were too far back. All that was missing was Robert Fripp! I noticed an uncanny resemblance between Theo and Robin Gibb, although that may have been a combination of my failing eyesight and the twenty or so yards we were from the stage!

With a fair few fans in the audience, Bruce Soord and Jon Sykes of The Pineapple Thief were guaranteed a good reception. This is fourth time I've seen these two in just under 8 months, and it was refreshing to see Bruce and Jon play stripped down versions of songs I have become maybe too familiar with this year. Using only Bruce's acoustic and Jon's electric double bass for backing it showed that the emotive songs of The Pineapple Thief are more than capable of standing on their own merits when laid bear. Perhaps Bruce should consider releasing an album of these bare bones versions along the lines of No Sound's lovely The Northern Religion Of Things? I know I'd buy it.

The much anticipated headliners were of course No Man and they did not disappoint. Much more immediate live than on record, a five piece band backed Tim Bowness' otherworldly voice. You may laugh, but purely from a sonic perspective his voice puts me in mind of David Cassidy! A strong set covering all the 24 years of the band, including a song written in 1987 never performed before, reminds us that this band have been going for as long as Porcupine Tree, and it could be argued that as PT started as a one man bedroom project, that No Man was Steven Wilson's first band proper, a fact that often is overlooked. Initial focus was inevitably on Steven who was obviously enjoying his status as band member rather than leader, and soon the focus of attention was the band as a unit, not just Steven, who together with Michael Bearpark created ambience rather than dominating proceedings on their guitars. Also adding to the sonic texturising was keyboard player Stephen Bennett, but if any one instrument stood out it was the dazzling electric violin of Steve Bingham.
A thoroughly enjoyable night's entertainment, and I can only hope we do not have to wait another 10 years for a similar event.

No Man setlist: my revenge on seattle / time travel in texas / all the blue changes / pretty genius / lighthouse / beaten by love / wherever there is light / mixtaped / things change
at October 16, 2011