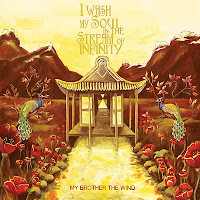 You may get the impression from the title and the cover of My Brother The Wind’s keenly anticipated second album that a meditative experience is what is on offer here, and you may be right. However, the opening piece, with the aptly adrenalin fuelled title of Fire! Fire!! will instantly dispel any notions of calm Zen-inspired navel gazing with its wah-noise attack, reminiscent of one of Acid Mothers Temple’s more tuneful sonic assaults. An opening thirteen plus minutes of aural rearrangement that you WILL find a groove in, it won’t let you go until you do. Actually the more you listen to this song the more you can find to latch on to and it gets to the point where I’m not entirely sure I heard that melody, or if it was some random synapse connection in my head that made me imagine it. Once the spaceship has escaped the pull of Earth’s gravity, the bass guitar of Ronny Eriksson propels the song along on a more relaxed but still speedy grove as the sounds become more stretched, spaced out.

Phew! Things chill a bit from here on in, Pagan Moonbeam giving out the Eastern vibe implied by the cover artwork, which would not have looked out of place on a Jade Warrior album. As the band say themselves the music being completely improvised comes “… from the soul, through the fingers, directly to tape” and this work ethic is repeated in the title of The Mediator Between Head And Hands Must Be The Heart, an infectious bubbling piece of sonic mysteriousness where one can almost feel the communication between the players. The drummer, Tomas Eriksson gets credit here for keeping what may have turned into an almost Eno-like ambience on track with some fine playing off the beat.

Torbjörn Abelli, a pioneering Swedish psychedelic bass player who died last year may not be a familiar name to you (or me for that matter), so have a look at Julian Cope's retrospective of his early band Pärson Sound for enlightenment, of course written in the Archdrude's inimitable style! As for the song here it builds to a righteous but respectful celebration, as it should. Things get to (Kraut)rock on Under Crimson Skies which raises the beat to a space boogie shuffle that Amon Düül II would have been proud of. Things eventually get all stretched and spacey and the change is seamless. The chemistry between these guys is something special, and although their first album was a good start, the test tube is now boiling over with ideas. You could describe this as space rock but that is putting far too many limitations on what is almost impossible to describe. On this menu My Brother The Wind have cooked up a dish of Scando-Germanic righteousness that exists on the peripherals of American-British influence, taking the best elements of improvisational Krautrock and running with it until it turns into a creature of some magnificence. An animal that inspires awe and respect.

The closing song and title track I Wash My Soul In The Stream Of Infinity repeats a Zen-like musical mantra over which swathes of gorgeous mellotron leave the listener in a state of near bliss, cleansed in the fading stream. As purely improvisational albums go, can it get any better than this? Buy it as soon as it comes out!