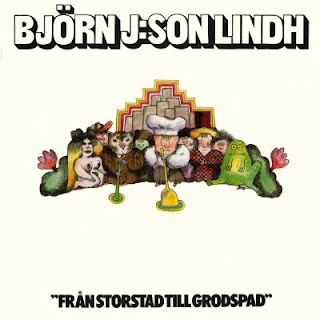 A buried obcscurity from Sweden, this is the sort of thing that would have remained well hidden were it not for ye olde interwebby. Recorded in 1971 in Stockholm, apparently using a lot of the musicians who were also associated with Bo Hansson, this oddity mixes classical, funk, pop, avant garde and funky jazz fusion on the side long track Music From A Big City, which seems to be a depiction of the never ending battle between nature and urbanisation. I make this guess as the album title roughly translates as "From Big City To Frog Broth", which may or may not be a subtext from a battle between nature and man, something confirmed once I checked out the liner notes (see below).

Side Two is a collection of avant-pop vignettes that could well be snippets of incidental music for film and TV, and intriguing though it is, Music From A Big City is the only reason to get hold of this, if you can. If you can't here it is in all its glory on YouTube:

For further info, here's an English translation of the original LP liner notes:

"From Big City to Frog Sauce"

To represent Swedish Radio in the international radio broadcast of the 1971 Prix Jean-Antoine Triumph Variete, a radio man, an actor and a musician were invited to depict reality through music.

The result was a large city. Based on authentic audio recordings of daily urban sounds in Stockholm, improvising musicians presented a vision of the modern metropolis. Cars, sirens, pile drivers, church bells mix into an inferno of music. From the treacherous calm of a city morning, these sounds eventually rise up to smother those sounds nature calls her own. This is a highly personal image of an environment to which millions of people are forced to adapt daily.

Björn J:son Lindh, 27, has one of the most significant profiles in the modern Swedish music scene. His compositions and arrangements have contributed (among other achievements) to the success of Cornelis Vreeswijk's double LP Poems, ballads and a little blues. Lindh can also take a great deal of credit for the attention given to Bernt Staf's debut. Together with Hawkey Franzen, Lindh wrote and produced the LP View from Djupvik, and he has been one of the central figures in the celebrated group Jason's Fleece.

In the late Summer of 1971, Lindh (a flute soloist) released his debut solo album. Rarely has a pop-jazz record received as much acclaim as Ramadam.

Besides a large number of record productions, Lindh has also written music for TV and stage. He studied flute formally at the Royal Swedish Academy of Music, and is also trained as a pianist.

In addition to "Music from a Big City", which received Second Prize in the 1971 Triumph Variete in Monte Carlo (and which occupies one side of this LP), this album shows Björn J:son Lindh further testing his composition and performance skills. "From Big City to Frog Sauce" is proof of how strongly a seriously trained musician and composer with a strong dramatic personality can handle modern pop music, whilst creating work that shows music a way forward in the 1970's.

The Swedish Composers Performing Rights Society (STIM) contributed financially to the production of this disc.