Sanguine Hum - The Weight Of The World 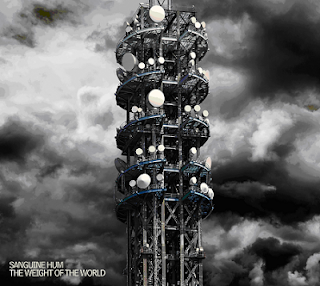 Sanguine Hum are now on their second album, and the first to be recorded under the Esoteric Antenna wing. Their debut, the rather fine Diving Bell was initially released in November 2010 through the Troopers For Sound website before being picked up by the label.

In between the two studio albums was Live In America released last October. A busy period for this young Oxford band, it would seem, and one that has produced some quality music.

With Diving Bell, the band gave us a confident statement of polished art rock that fits in well with the modern zeitgeist. There is definitely something in the air, for bands like this, and Brighton's inFictions/Diagonal/Baron collective, and from over the water groups like The Tea Club and Dissonati all share a common feel, if not a sound. They all use post-rock and prog influences and all have come up with something fresh, and Sanguine Hum are certainly up there with the best of the current crop.

Less ebullient than the debut, The Weight Of World is a more considered and less bustling affair, as its title implies. As is often the case the drummer has changed from the first album, but other than that the line up has remained stable. Why is it always drummers?

This new considered approach has resulted in the closing and title track here stretching out to epic length, a first for the band, more of which later.

Brad Waissman, Joff Winks and Matt Baber have been together for over ten years, originally releasing three albums as Antique Seeking Nuns. If ever there was a wise decision in the name changing department this was probably it! The two frontline players Matt and Joff have been together even longer and all three show the benefit of those many years of playing together, producing some gorgeous melodic intertwinings, in evidence right from the start as From The Ground Up builds subtly in just the manner its title might suggest. Quite lovely instrumentation. Not to be left out by the guitarist and keyboard player, bass player Brad weaves some complex contrapuntal lines over the solid unassuming beats laid down by Andrew Booker.

A feature of this band is Joff's breathy countertenor, a quite unusual voice in a "rock" setting, and one that is used without ever becoming strident or an unnecessary focus as could so easily have been the case.

This is a keyboard-led album, but they never descend into that cheesy 70s sound we are all too familiar with, and a trap that snares many bands labouring under the prog banner. An example is the spidery and insidious synth sound weaving its web through System For Solution; Matt has no desire to ape Tony Banks, for sure! This song is fast turning into my favourite on the record. The lyrics are all but done and dusted halfway in, and we have been taken on a musical carousel ride, concluding with a subtle guitar break, before being told that "The first step you find fascinating"; indeed it is.

The guitar does make occasional other forays but is largely there as texture, and Joff has enough going on with his voice anyway. A rare solo, short and sweet, bursts out of Joff's guitar on the title track, and its very novelty lends it extra weight.

We are treated to some of the recurring lyrical themes beloved of young bands; destiny, railing against society's programming, urban angst, but all written in a manner that rises well above the prosaic one often encounters. When concerns take a more ambiguous turn on the likes of Day Of Release and Phosphor they are much the better for it.

Ah, yes, the "epic" referred to earlier! The Weight Of The World (parts 1 to 3), all nigh on 15 minutes of it, is a charming construct and nowhere near as gloomy as it could have been in other hands. You can just imagine what a song called that and penned by Mr Wilson would sound like, can you not?

Its lyrical concerns are blurred; is it a personal "weight" or something alluding to the metaphysical? Is the "dirt" being swept "under the rug" a personal bête-noire or something of larger environmental concern? The listener can make up their own mind on that one.

Musically it is as light on its feet as the rest of the album and keeps the theme on a long but never severed leash. Brief Dave Stewart-like keyboard flurries and what sounds like a vibraphone fleetingly point to the Canterbury influences that were far more to the fore in the band's previous incarnation.

The song wends its merry way and will not be hurried, but there is no room for filler, no needless noodling to fill the minutes for these guys. Languorous synth and strummed guitar accompany Joff's oblique musings, the contemplative sounds perfectly fitting the lyrics.

As epics go it is not one that transports the listener with jaw-dropping moments of stunning musical dexterity, but Sanguine Hum are not that kind of band, as you may well have surmised.

With a gig at London's The Borderline coming up on 7th June in support of Colin Moulding's Tin Spirits and this fine album under their belts, the weight of the world should be getting a little lighter for this fine band. See you at the gig!