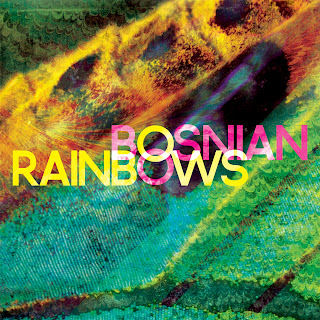 If you have too much time on your hands, trying to run to keep up with Omar Rodriguez-Lopez's prolific output could turn into a full time occupation.

With six studio albums released under the now defunct banner of The Mars Volta, not to mention a mere 34 albums counted on his own Bandcamp page (ok - some of these might be EPs or singles, you're welcome to find out!), chasing after Omar is the pursuit of an obsessive, and he's, (and it will be a "he", I've no doubt) welcome to it.

The easiest thing to do is stand still, there will be one along in a minute...and here it is, hoving into view, soon to be in our anticipating hands in the form of the first self-titled album by the cryptically named Bosnian Rainbows

There were too many brackets in that last paragraph but one, which neatly sums up Omar's convoluted musical passage. After a brief re-union of pre-TMV band At The Drive-In, Omar, along with the last drummer for TMV, one Deantoni Parks, got together with singer Teri Gender-Bender, and Nicci Kasper on synths and keyboards and formed Bosnian Rainbows.

The result is akin to handshake across generations, with a fusion of punky attitude à la Siouxsie crossed with Patti Smith from Ms Gender-Bender, backed by some energetic new wave spikyness from the band, all present and correct in single Torn Maps, fused with Omar's unique acid-jazz-prog-punk fusion, which comes to the fore on the only other track we are privy to before the 25th June release date, Turtle Neck.

I'm intrigued, as this is a definite departure from The Mars Volta's propensity for pointless noodling, especially in the middle period of their tortured journey.