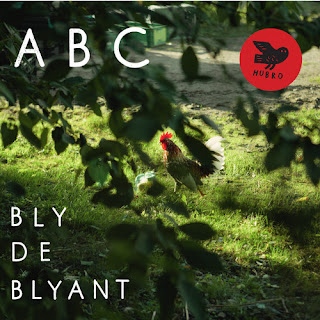 Bly De Blyant are another one of those bands one stumbles across while looking for something else entirely. In fact I had completely forgotten I had sent the band an email asking if they wanted their work reviewed here, such is the pace of life at ABS Towers.

Anyway, when Norwegian drummer Øyvind Skarbø kindly replied to my request in the affirmative, I had to remind myself what I was letting myself in for.

A quick perusal of the album sampler on Soundcloud allayed any fears I may have had at making a possible rash choice, as ABC is a fine and wonderfully undefinable work.

As well as Øyvind on drums we have Brooklyn-based multi-instrumentalist Shahzad Ismaily, who has played with John Zorn amongst others, and a rather fine Icelandic guitarist by the name of Hilmar Jensson, and together they produce a glorious racket that will have the more conventionally attuned music fan running for the hills. It must be getting crowded up there, is all I can say.


Lurching into the prismatic vision of the disturbed mind, after the short, calm, but quietly unsettling intro of Soft Zoo is Mordechai, whom, after he has settled one or two grudges sits down to mull it all over.

Oblique strategies abound as the multi-national trio take on improvised short spiky bursts of angular post-punk Wire infulenced shudderings, skewed ambience on what sounds like de-tuned glockenspiels, but most likely isn't, to guitar-as-jackhammer Beefheartian cacophony to post-industrial ambience, and all points inbetween, around, above and below. Restricting themselves to a genre is just not anything these boys are the slightest bit interested in, and for once, the old cliché of "We make the music we want to make, if anyone else likes it, all the better" actually applies. Those are my quotes, not the band's by the way. As Øyvind says himself "Free improvisation is a method, not a genre".

Recorded the old-fashioned way; three guys in the same room at the same time, no headphones, means the listener can almost feel the musical telepathy as it zings back and forth across the soundstage, which in this instance was the Greighallen Studio in Bergen, Øyvind’s home town.

Taking cues and treated pianos from John Cage, as well as nodding in the direction of Stockhausen, Faust and Can, the sound alternately creeps around quietly and then suddenly demands that you PAY ATTENTION! Tunes sometimes pop up, like the brief Batman theme on prescription drugz that is Shnily, followed by Wang Dang Doodle, an all too short tantalising jazz surprise in the midst of the madness. Daft, but it works!

Hutch Jesus I & II reveal something nasty scurrying about in the straw, while Controversy picks up the jazz theme from earlier and distorts it beyond the limits of flange, turning the funk inside out. By the time it gets to the end, the tune has resolved itself into a straight disco-strut. Gang Of Four was never quite like this.

The longest song here is Curtis and it is a thing of structure, slowly rising on the back of a simple guitar motif and odd keyboard embellishments. Everything is then put through a giant fuzzbox and it gets bigger and bigger. This Curtis fella means business. The repeated mantra makes it easy to imagine three heads nodding away on the beat in the studio. All too quickly it's over, and we're into album closer Snares.

Whereas a conventional album would have ended with the righteous Curtis, you just know that would be far too obvious for Bly De Blyant, and so it proves, as Snares shuffles its way across the floor, dragging its feet on a funereal beat, over which almost wistful guitar breathes a departing sigh. Too odd to be lovely, but beguiling, nonetheless.

At what may seem a mere 36:35 long, this is just right, as any longer and it may have become hard work. Definitely one for those of us with a need to scratch an obscuranist itch now and again. I know at least three people who would love this and countless numbers who wouldn't understand. It's their loss.